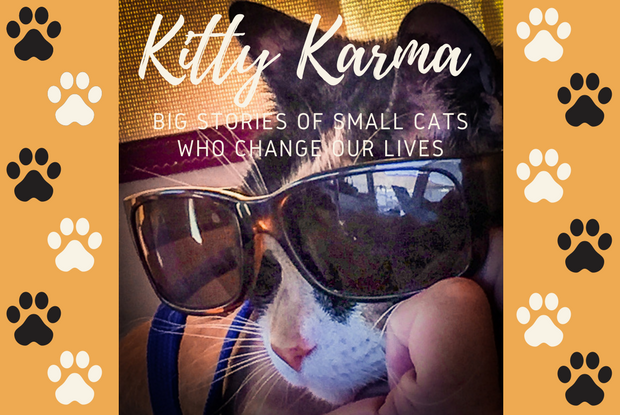 We’re proud of the great work being done by our client, Kitty Karma Books, to help improve the lives of cats and kittens around the world.

Update November 2017: The Kitty Karma Indiegogo campaign exceeded its goals and is now in “demand” mode.

Below, published with permission, is the news release announcing the project.

Tuesday September 26, Toronto: Why should dogs feel all the love?

That’s what Kitty Karma Books’ founder and publisher Wai-Lin Terry thought to herself just before epiphany struck. “Having seen so many books devoted to dogs, I thought it was time to have one devoted to cats,” said the former top Wall Street executive and volunteer at Toronto Cat Rescue.  “After all, a life graced by a cat is changed forever.”

And with that, Kitty Karma Books was born.

To do this, Terry will launch an IndieGoGo crowdfunding campaign on October 1 to raise funds to cover publishing and production costs of Kitty Karma: Big Stories of Small Cats Who Change Our Lives.  The campaign is live, and affords opportunities to sign up and get access to secret perks.

The book’s collection of stories, donated for free by nearly two dozen authors, will feature tales of adventure cats and feral cats; cats who are sailing on high seas off the coasts of New Zealand and Mexico; and a cat sanctuary located in a war zone. Readers will learn about a popular cat café in Ontario, Canada as well the first cat café in India.

The book will be published and available for sale in November. All net proceeds from book sales will be donated to support three incredible cat shelter charities – Il Gattaro D’Aleppo in Syria, ABay Kitties of Hawaii, and Whangamata CAT in New Zealand.

Kitty Karma: Big Stories of Small Cats Who Change Our Lives is a heart-warming and heart-rending collection of stories that unveils a world of cats rarely seen and rarely known, and the book’s remarkable editorial contributors are united by one simple thing: a fierce and passionate love for cats.  Contributors include:

“I believe that cats bless us when they favour us with their attention and the world is a better place when there is a cat at home and cat fur on our clothes,” concluded Terry. “The width, depth and breadth of joy a cat can bring into our lives is without measure.”

About the Author Boni Wagner-Stafford

Boni is co-founder of Ingenium Books. She's author of One Million Readers: The Definitive Strategy to a Nonfiction Book Marketing Strategy that Saves Time, Money, and Sells More Books. Boni is an author coach, editor, and ghostwriter. As an award-winning former Canadian television reporter, news anchor, producer, and talk show host, working under the names Boni Fox and Boni Fox Gray (it's a long story), Boni covered politics, government, the economy, health, First Nations, and crime. She won several Canadian Association of Broadcaster (CAB) awards and a Jack Webster Award for best documentary. Boni also held senior management roles in government, leading teams responsible for editorial, issues management, media relations, and strategic communications planning. Boni is co-author of Rock Your Business: 26 Essential Lessons to Start, Run, and Grow Your New Business From the Ground Up and, like any good author, has several books in progress.

How to Create Brand Content that Drives Sales and Success

4 Questions to Ask Before You Hire A Web Team

4 Things to Understand About the Power of Marketing

10 Qualities of a Winning Business Plan

5 Key Attitudes of a Successful Entrepreneur

Hunker Down, or Hire Help? The Entrepreneur’s Dilemma