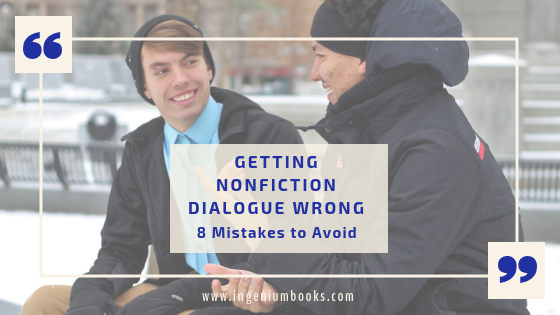 Learning to write nonfiction dialogue is a must. It adds life and colour to the text, helps to move the narrative forward, and tells us more about the characters. However, bad dialogue, and bad use of good dialogue, can do quite a lot of damage to the quality of your book. Unfortunately, it’s easy to get nonfiction dialogue wrong. Let's take a look at eight mistakes to avoid, and what to do instead.

The main purpose of dialogue is to help move the narrative forward. It should give your readers just enough information to pique their interest. In non-fiction, your dialogue is generally based on real conversations. For example, interviews. You might be tempted to reproduce an entire conversation, or a long excerpt of a conversation. This is probably too much, too soon.

Instead, go through the interview that you’re using as your source material. Break it up into smaller chunks, each one covering just one or two pieces of information. When you’re covering a certain topic, add only the chunk of dialogue that is relevant to that topic.

2. Not Covering Anything Relevant

Including dialogue simply for the sake of it won’t add anything to the narrative. It won't move your story forward. Instead, it can distract from the story you’re trying to tell. Before you include dialogue, ask yourself these questions:

If the piece of dialogue consists mainly of small talk or of information that isn’t relevant to this part of the narrative, don’t include it. Instead, you can summarize it: We made small talk for a while. Or, She showed me around her garden and explained the medicinal properties of each plant.

The advantage of writing nonfiction dialogue is that you don’t have to make it up. You’re mainly using actual dialogue: conversations that really did happen. This means that it’s easier to avoid the trap of writing unrealistic dialogue.

However, at times you might have to use conjecture to invent dialogue as it may have been spoken. For example, in a memoir when you must represent dialogue you know occurred, but you weren't physically present to witness it. When you do use conjecture, keep in mind how the person would talk in real life. Very few people talk in a formal, stilted manner. You may find it useful to read the dialogue out loud to hear what it sounds like. Also bear in mind that people often make grammatical mistakes when they talk. Don’t try to correct their grammar too much, or they may all start sounding like university professors.

Reproducing real dialogue has its own pitfalls. Most people use fillers when they talk: “um”, “ah”, and so on. Including these can break up the flow of the text and distract from what is being said. The same goes for unstructured trains of thought: people may get sidetracked and go off topic when they talk in real life. This can become very confusing to your readers.

When you write nonfiction dialogue, you may need to edit it a little. An “um” or an “ah” here and there can add realism but if there are too many of these, you'll want to edit some out. Only include the parts of the dialogue that are relevant. If it’s important to the narrative, you can include descriptions instead: He stuttered a little as he spoke. Or, She went off on a tangent about the parties they used to have, before returning to the topic.

Dialogue tags are those little phrases like “she said”, “I asked”, “he replied”. They have the important function of telling us who is speaking. Not including them will soon leave your reader bewildered, trying to figure out who is saying what.

However, including them every time someone speaks can become distracting too. The secret is to find a middle ground. Read the dialogue aloud and see if it’s easy to follow who is speaking. Whenever it might be unclear, add a dialogue tag.

Another mistake writers often make with dialogue tags is getting too creative with them. “I whispered with a trembling voice”, “she enquired quizzically,” and “he declaimed,” can detract from what is being said. Neutral dialogue tags such as “he said” or “she replied” are unobtrusive and the reader’s attention will stay with the dialogue itself.

6. Not Setting the Scene

No dialogue happens in isolation. While people are talking, there are many things happening around them. Birds chirp, cars drive past, dogs bark in the distance. The speakers themselves are doing things other than talking too. They take a sip of their drink, scratch their head, stare into the distance. All of these things help set the scene.

When you write your nonfiction dialogue, insert sentences in between to describe what’s happening. This will also help you avoid those overly creative dialogue tags. For example: He looked down, dropping his voice to a whisper when he spoke next. “I never thought it would happen to me,” he said.

We can tell a lot about how someone thinks or feels from what they say. Writers often make the mistake of spelling everything out. For example: “I’m done here!” he shouted before stomping off. He had had enough and wasn’t going to say anything more on the subject.

The second sentence is superfluous: from the fact that the speaker shouts that he is done and then stomps off, it’s pretty clear that he’s not going to say anything more.

Different accents can add wonderful colour to a dialogue. However, trying to reproduce them too faithfully can leave you with lots of unintelligible words. Instead, you can add one or two phrases in phonetic spelling to give a sense of the accent and then continue in regular English. For example: I asked him where the house used to be. He thought for a moment and then pointed towards an open field. “I dinnae. Oor air,” he continued in his thick Scottish brogue. “I was just a lad.”

The key is to practice, and practice. Read the work of other nonfiction authors and pay attention to how they handle their nonfiction dialogue. Soon you'll find your own work is popping with life and colour, your narrative arcs are round and healthy, and you and your readers are happy.

What do you think? What are some other dialogue mistakes we should all avoid?

About the Author Boni Wagner-Stafford

Boni is co-founder of Ingenium Books. She's author of One Million Readers: The Definitive Guide to a Nonfiction Book Marketing Strategy that Saves Time, Money, and Sells More Books. Boni is an author coach, editor, and ghostwriter. As an award-winning former Canadian television reporter, news anchor, producer, and talk show host, working under the names Boni Fox and Boni Fox Gray (it's a long story), Boni covered politics, government, the economy, health, First Nations, and crime. She won several Canadian Association of Broadcaster (CAB) awards and a Jack Webster Award for best documentary. Boni also held senior management roles in government, leading teams responsible for editorial, issues management, media relations, and strategic communications planning. Boni is co-author of Rock Your Business: 26 Essential Lessons to Start, Run, and Grow Your New Business From the Ground Up and, like any good author, has several books in progress.

How to Choose the Best Self-Publishing Approach for Your Book

4 Big Reasons to Use Passive Voice When You Write Nonfiction

The Terrible & Terrific Truth About Using Dialogue in Nonfiction

Previous Post Tired of the Same Old Stock Image Sites? Here Are 10 New Options Next Post How to Embrace the Imperfect First Draft of Your Book